This week, in English Studies Abroad (see previous post), we are “visiting” Bath. By “visiting,” we are focusing our study and readings on the city, as we will do with different locations (or figures) each week. For Bath, my goal is to focus on the striations of history, important not only for this particular place, but also to set the tone for the rest of class as well as provide a basic overview of British history. It’s been intriguing preparing for this week because, not being an expert in the nitty-gritty details of each city, there are aspects I am learning along with my students. I love it as it increases my enthusiasm with the material.

We started our “visit” with the city’s Roman-British history, which, of course, centers on the public baths, the hot springs being the reason people settled around it in the first place. Originally a shrine to the deity Sulis, the Romans named the area Aquae Sulis, co-opting the deity and aligning it with their Minerva. The Roman preoccupation with public baths is well-known, even to the point that they found it necessary to build them into the frontier forts along Hadrian’s Wall. I visited Chesters Fort a couple of years ago; the baths there take up about a third of the settlement (the following is a photo of the remains of the baths). 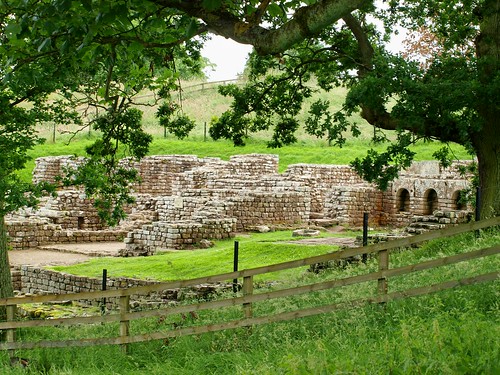 I have been having a particularly entertaining time reading about the curse tablets people would throw into the waters, hoping to get revenge on those who have wronged them. The tablets, some on display at the Roman Baths, which we will visit, are quite explicit – asking for the blood of the cursed or something a bit more or less gruesome (interesting images and background on the tablets).

When the Romans pulled out of England, we can imagine what places like Bath must have looked like, particularly a few centuries later, with the remains and ruins of their baths and stone walls. I ruminated in class about the idea that the images we see in the Exeter elegy The Ruin, if we step back from metaphorical readings, might be a glimpse of the experience of the Anglo-Saxon living with the physical Roman past.

Wondrous is this foundation – the fates have broken
and shattered this city; the work of giants crumbles.
The roofs are ruined, the towers toppled,
frost in the mortar has broken the gate,
torn and worn and shorn by the storm,
eaten through with age. (ll 1-5)

I like to think about the connection to our own journey as we explore the ruins of generations that came after this poem’s composition. Of course, it is widely speculated, and often debunked that The Ruin is written about Bath, but it is still an idea I find poetic.

The hot springs appear to have been widely known, if their appearance in the histories is any indication. Nennius, for instance, included them as one of his “Wonders of Britain,” a list often attached to the end of manuscripts of his Historia Brittonum. The pools at Bath were described as having magical properties – cooling and warming upon the desire of the bather. The reputation no doubt was increased by the perceived medicinal or miraculous, depending on your point of view, healing qualities. By the time we reach Geoffrey of Monmouth, Bath is associated with the great Battle of Badon Hill, thereby incorporating it into the Arthurian tradition to which Geoffrey’s work greatly contributes.  In his Prophecies of Merlin, it is foreseen that Bath/Badon’s waters “shall grow cold, and their salubrious waters engender death” (VII.3).

A portion of our discussion has focused on Bath’s position throughout its Roman and Anglo-Saxon history as a border or frontier town. As we can see from this map of Roman Britannia (c. 150AD), Bath, not located on the map but which lies to the south and a bit to the west of Gloucester, is situated on the outer western borders of Roman-occupied territory.

By the time of King Alfred the Great, Bath was a contested area between Mercia and Wessex (and even more so as the Danes pressed in from the north, before and after the Danelaw was created).

When Alfred began building up his series of fortifications throughout the kingdom, Bath was one of these burhs, listed in the Burghal Hidage, a document containing an account of these fortifications and their taxes (always an important piece of information for kings). At Bath, he had masons use the existing Roman stone as part of their reconstruction and strengthening of the city walls.

The borderland space that Bath occupied created unique opportunities, including its development as an influential market town. That particular characteristic carried over for quite some time, particularly as it became known for its wool trade. The merchant guild was formally recognized in the 12th century. Eventually, Catherine of Alexandria became the patron saint of the city – her wheel of torture perceived in the requisite spinning wheels. How well known Bath became for its wool and textiles can be seen in Chaucer’s “General Prologue” to The Canterbury Tales. We find the Wife of Bath naturally associated with her clothing and her cloth-making skills: “Of clooth-makyng she hadde swich an haunt/She passed hem of Ypres and of Gaunt” (ll. 449-50). Readers would have more than likely been very aware of Bath’s foremost industry.

We found it of particular note that Bath, after the Norman Conquest, was purchased by John of Tours following the Rebellion of 1088 between William the Conqueror’s sons. The winner William Rufus – quite a guy. He liked to sell or grant lands and bishoprics to his personal favorites. The note-worthy part of this exchange is the fact that John of Tours was a doctor (he was at the Conqueror’s deathbed). Given the persistent belief about the healing qualities of the springs, we can perhaps speculate that his occupation led to the rise in the next century of several hospitals, St. John’s, for instance. In the 13th century, leper houses developed, segregated baths built to ease their suffering. The hospitals, as was the wont of their medieval incarnations, served as hospices for the elderly, who were often soothed by the hot baths.

There is so much more to think about, particularly the history of another of our destinations, Bath Abbey, which has fascinating historical striations on its own and is connected on every level to the city’s various pasts, from the Anglo-Saxon when it was first built to the later hospitals to its present incarnation. We can stop at medieval Bath or continue on with Queen Elizabeth I’s favor and the revival of its spas, which are extremely popular by the time we get to Jane Austen and Bath’s appearance in several of her works, including Persuasion (my favorite of the novels) and Northanger Abbey.

An exercise I found enlightening as we prepare to visit Bath is a site put together for those interested in walking tours of southern England. In its description of the walk, it overlays the outlines of medieval Bath with the present-day city. Comparing these descriptions to Google Maps (in satellite mode) is a useful way to visualize landmarks and timelines.

Our Google Map project is getting off the ground, which you can see here (unfortunately, WordPress has not caught up with the new GM embed code). Also, here is the link to a collection of some of our online readings in Readlists (including background, news articles, texts, maps, etc.).

Geoffrey of Monmouth. “Arthurian Passages from The History of the Kings of Britain.” The Camelot Project. University of Rochester, n.d. Web. 18 Jan. 2014.