English Studies Abroad: “London, thou art the flour of Cities all”

London, thou art of townes A per se.
Soveraign of cities, semeliest in sight,
Of high renoun, riches and royaltie;
Of lordis, barons, and many [a] goodly knyght;
Of most delectable lusty ladies bright;
Of famous prelatis, in habitis clericall;
Of merchauntis full of substaunce and [of] myght:
London, thou art the flour of Cities all.
– “In Honour of the City of London,” William Dunbar

As I discussed with my students this week, London creates some interesting difficulties, at least in terms of finding the physical remnants of the medieval city. That annoying Great Fire of 1666 has a lot to answer for! In some ways, however, the destruction is an opportunity for a little literary archaeology.

As background, we read the chapter “Images of London in medieval English literature” in Ralph Hanna’s Cambridge Companion to the Literature of London. He begins his discussion with Dunbar’s poem as well. He notes that Dunbar is a “tourist . . . not only from outwith the City but outside the realm itself” (22). Dunbar’s poem demonstrates a respect, not for the royalty, but the merchant class. He lauds, “Upon thy lusty Brigge of pylers white/Been merchauntis full royall to behold” (ll. 33-4). As Hanna asserts, this focus “reveals that it had become possible, on the edge of the early modern period, to appreciate openly what in the Middle Ages may have been too problematic for discussion. A great many medieval literati, both authors and readers, will have found . . . mercantile culture a problematic concept, if not an outright oxymoron” (21). To illustrate this point, Hanna turns to older accounts and descriptions of the city.

In class, we took a look at one of these: William FitzStephen’s  12th- century “Description of London,” which often appears as a prologue to his life of Thomas Becket. Hanna comments that FitzStephen “scarcely see[s London’s] commerce” (23). He may have a point; however, he does overlook some key lines. FitzStephen touts, “Every morning you can find those carrying on their various trades, those selling specific types of goods, and those who hire themselves out as labourers, each in their particular locations engaged in their tasks. Nor should I forget to mention that there is in London, on the river bank amidst the ships, the wine for sale, and the storerooms for wine, a public cookshop.” Later, we see even more direct mention of the middle class: “Middlemen from every nation under heaven are pleased to bring to the city ships full of merchandize.” This description is followed by a poem extolling the goods brought into the city. These lines may not comprise as high of a percentage as that in Dunbar’s poem; however, they are significant. Further, in another of Hanna’s examples, Richard Maidstone’s late 14th-century Concordia (The Reconciliation of Richard II with London), there is a distinct grandeur granted to the middle class as they gather for the processional of the king:

Then after this a decked-out troop from every guild.
Their suit proclaims that each one is quite separate:
A goldsmith, a fishmonger, and after him
A mercer bent on trade, a seller of fine wine,
A grocer, baker, painter, and a stonemason,
A knife-maker, a barber, and an armorer,
A carpenter, a shearer, tailor, shoemaker,
A skinner, dyer, shopmonger, a smith as well,
And here the bowmen, butchers, and the thatchers too,
The lorimers and drapers too, they came along;
A sheather, girdler, were here, a weaver there,
A chandler and a waxmaker were there as well;
A brewer and a stirruper, a joiner too,
As well there was a fruiterer and poulterer.
Among these guilds a welcome “A” stands on an “R”
[ . . . . . . ]
A glover, pursemaker, a taverner, a cook:
From each one’s suit of clothes, his craft was clear to see. (ll. 79-95)

Hanna addresses these lines as a “dressed up” London, and perhaps we can also chalk it up to the fact that this particular work is “only” a hundred years prior to Dunbar’s. Nonetheless, it indicates that the mercantile activity of London was not as absent from the literature of the city as Hanna makes it seem. 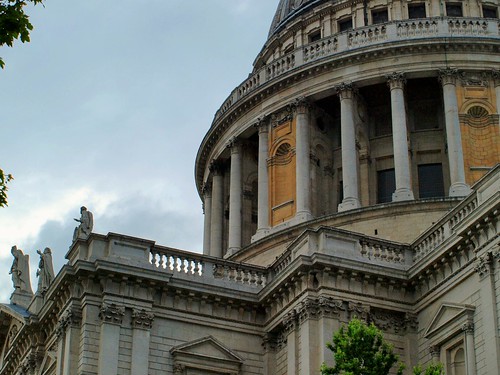 We did not take a look at Maidstone’s Concordia as a class; however, it is a rich text. In particular, it is a vivid description of traditional processional routes throughout the city. The two stops made by the king particularly relevant to our travels are St. Paul’s and Westminster Abbey. Hanna offers his thoughts concerning the significance of these locations: “[T]he king enters St Paul’s to make his offering to the City’s patron, St Erkenwáld, a famous Anglo-Saxon’bishop of London. But near the procession’s conclusion, the king effectively atones for any possible dereliction from or dilution of proper royal religious sympathies by a stop at Westminster Abbey” (25). The king’s stop at St. Paul’s is to honor the city and his stop at Westminster, traditional coronation site, honors the kingdom, demonstrating that the two are not always one and the same; indeed, they find themselves in conflict frequently.

The reference to St. Erkenwald leads us to another very “London” poem. It has been a while since I have taken a look at the late 14th-century Saint Erkenwald, but, if I may be forgiven for quoting myself in an article I published a few years ago, “Defining the Medieval City through Death,” it is clear that the poem and the saint are distinctly London: “This work has long been acknowledged as a text intimately tied to the city [London] in which it is set. The poem’s opening prologue sets the text firmly within the English city, describing it as the ‘metropol’ and the ‘mayster-toun,’ ‘the chief city’ . . . [T]he pseudo-history of London is recounted throughout the course of the text – how Brutus founded the city and so forth – all of which is situated in chronological relationship with the life of Christ, the effect of which is to create a parallel timeline for the city . . . The Saint Erkenwald poem represents a nexus of these images – historical and contemporary London, St. Paul’s Cathedral, and a saint with strong urban ties” (200-2). St. Erkenwald is a local saint, London’s patron, his story resonating with the inhabitants of the city even as his body is physically present in St. Paul’s.

In order to prepare for our visit – and perhaps lessen the element of shock in being there – we spent some time in groups in class researching the medieval histories of four of the “must see” sites we will get a chance to experience: St. Paul’s Cathedral, Westminster Abbey, Tower of London, and Temple Church. General discussion focused on the rebuilding or, at the least, the building on to of these landmarks as well as how William the Conqueror keeps showing up in these histories. Beyond that, we took wild turns: learning about Templars, considering the separation between London and Westminster, wondering about the “oldest surviving door in England” in Westminster Abbey, thinking about how churches keep being rebuilt on the same locations, and reflecting on the crown jewels. 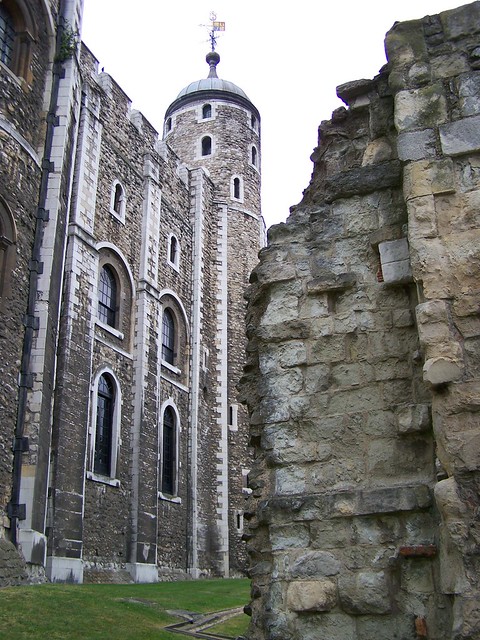 From London’s history and literary representation, we will be turning to London author Chaucer, starting our journey to Canterbury in Southwark with his pilgrims. I say “will be” because we have been delayed by Mother Nature’s strange preoccupation with snow. However, I’ll speak to our good intentions for playing catch-up.

The starting point is as always the famous lines from The General Prologue (in translation as we are encountering the text in class):

It happened that, in that season, on a day
In Southwark, at the Tabard, as I lay
Ready to go on pilgrimage and start
To Canterbury, full devout at heart,
There came at nightfall to that hostelry
Some nine and twenty in a company
Of sundry persons who had chanced to fall
In fellowship, and pilgrims were they all
That toward Canterbury town would ride. (ll. 19-27)

As I was rereading, I decided I wanted to think about our pilgrims in a different way than I have taught them previously. Given our focus on physical locations and locating literature within its geographical context, I thought it would be interesting to decide as a group upon locations that correspond to each of the pilgrims. To that end, I created a separate Google Map from our class project just for The Canterbury Tales, and, through discussion and some digging into the text, we will fix these locations. Some provide no difficulties – the Wife of Bath being the most obvious. However, others will require some close reading, research, and/or further extrapolation (based upon professions or other clues in the text). For those pilgrims whose tales we are also reading – these include the Cook, the Merchant, the Man of Law, the Pardoner, and the Second Nun – we can, if need be and is possible, use their prologues to help us. I have already posted locations based on their journey, including quotations from various prologues that allow us insight into where the travelers are. Snow willing, I will post again when we have completed this activity. I think it should be intriguing to see the results.

As a side note: I am always amused by the Cook’s Tale. It’s just such a romp (and, for our purposes, a London romp), and, though it provides little in substance, it leaves us with Perkyn’s friend’s prostitute wife. It’s almost unfair that it stops there.

The journal activity of the week is focused on the Nowell Codex. As we intend to visit the British Library to see the Beowulf manuscript (fingers crossed it is not pulled from display for some reason), I wanted students to have some background so they would be more knowledgeable about what they will see. To that end, we are reading through and examining a series of sites:

The activity includes responding in journals about the information learned in these sites as well as reflecting on the experience of looking digitally at this manuscript. Part of the intention is to take a whirlwind tour of medieval manuscripts by looking at the Beowulf in particular. I am curious what the students will pull out for this exercise.

Next week: we will continue our journey to Canterbury.

Hanna, Ralph. “Images of London in medieval English literature.” The Cambridge Companion to the Literature of London. Cambridge: Cambridge UP, 2011. 19-33. Print.

One response to “English Studies Abroad: “London, thou art the flour of Cities all””