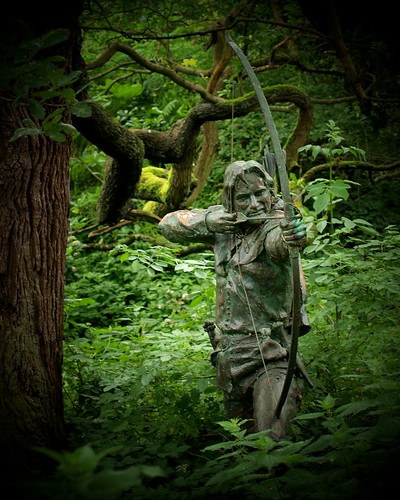 For anyone who has known me for any length of time, one fact quickly becomes apparent: I’m an avid Robin Hood fan. I have been for as long as I can remember. My first clear memory is watching Errol Flynn’s The Adventures of  Robin Hood, and my college dorm room was decorated with a poster of Flynn in his best heroic pose from the film – that poster now graces my dining room wall. I have an extensive collection of Robin Hood memorabilia that I’ve been amassing for over 20 years. All of this to say, I simply could not leave the outlaw off the syllabus in this course, even though we are not going to make it to Nottingham. This post only serves as a small snippet of an introduction to the character.

One of the first mentions of Robin Hood recorded is in William Langland’s fourteenth-century Piers Plowman. The site “Robin Hood: The Facts and the Fiction” contains a good online resource, as it pulls out from the Skeat version of the three parallel texts (A, B, and C) the passages related to the outlaw legend. The most significant is in Passus B.V in which the sin Sloth lists his shortcomings:

I can nouȝte perfitly my pater-noster as the prest it syngeth,
But I can rymes of Robyn Hood and Randolf erle of Chestre,
Ac neither of owre lorde ne of owre lady the leste that euere was made. (B.V.401-3)

In a similar fashion as Saint Augustine who castigates his younger self at the beginning of the Confessions for loving to read the stories of Aeneas and Dido rather than to focus on God, Sloth here admits to knowing the stories of Robin Hood rather than any prayers or Christian stories. The implication is that the stories of Robin Hood are well-known popular tales at this time. In the guide to an exhibit at the Robbins Library in 2006-07, John Chandler writes, “Sloth’s familiarity with drinking songs about Robin Hood, but utter lack of knowledge of things spiritual, also reflects the concern of the Church for the souls of people who likely attended mass grudgingly, but could readily recite popular songs.” This echoes Augustine’s disgust with himself over the same issue. And, yet, we all know the popular stories continue to be “more fun.” As a side note, this particular line also plays a role in my interest in memory in Passus V of Piers Plowman. Directly afterwards Sloth talks about forgetting his responsibilities and what he owes to others, making forgetfulness a part of the sin he personifies. The Robin Hood line too speaks to memory in that he can remember what he wants to, just not what he “should.” Selective memory, we call it today.

It is this popularity that makes Robin Hood  a frequent presence in early printed books. For the first part of the week (which was, again, interrupted by snow – I’m beginning to feel that Mother Nature has a grudge), we read selections from the TEAMS Robin Hood and Other Outlaws. In particular, we read the “Early Ballads and Tales,” which mostly originated in the fifteenth century. For whom were these tales written? In their introduction to the text, editors Stephen Knight and Thomas H. Ohlgren state:

The audience has been a matter of speculation. Some have thought it was close to the discontented peasantry who were central to the 1381 revolt (Hilton, 1976); another view saw the ballads as a set of general complaints from the lower gentry (Holt, 1989). Neither party has accounted for the lack of agrarian and tenurial issues, apart from the unusual episode of the knight in the Gest. Another commentator has seen the dynamic of the ballads in the struggle for power in towns themselves and the forest as a fantasy land of freedom (Tardif, 1983). As a result of these debates there now seems general agreement that the audience was not single, that it represented the social mobility of the late Middle Ages, and the myth was diffused across a wide variety of social groupings who were alive to the dangers of increasingly central authority, whether over town, village, or forest (Coss, 1985).

The “general agreement” that these tales indicate the “social mobility of the late Middle Ages” and that they appeal to a “wide variety of social groupings” seems like an accurate and useful way to think about them.

The early ballads are quite different from the Robin Hood that has evolved down to us today. Yet, at the same time, we see familiar characters and characteristics. Robin’s home in the greenwood (wherever that greenwood may be – Sherwood Forest or ones nearby) is fairly constant. One of my favorite memories is visiting the Major Oak in Sherwood (photo below). It is an incredibly peaceful location, and it is easy enough to imagine Robin and his merry men living a life of unabashed freedom under its branches. 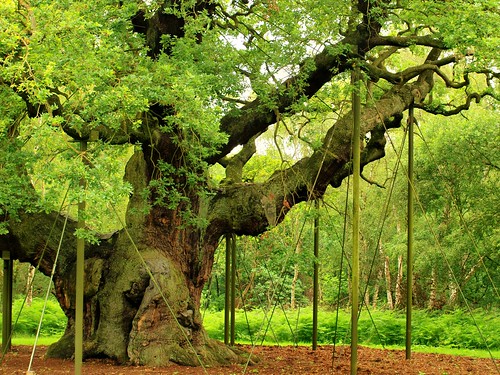 Also, his companion Little John is generally always nearby. The other familiar figures get added over time. Maid Marian, for instance, seems to be an addition when the tale is transformed into plays performed on May Day. Robin’s association with the spring is seen in the early ballads. In “Robin Hood and the Monk,” the tale begins, “Erly in a May mornyng” (l. 10). In “Robin Hood and the Potter,” the season is summer, yet no less descriptive of nature and its bounty:

In schomer, when the leves spryng,
The bloschoms on every bowe,
So merey doyt the berdys syng
Yn wodys merey now. (ll. 1-4)

It is no stretch to see how these stories, which laud the greenwood, the newness of leaves, and the singing of birds, became associated with the May Day celebrations. And it is no surprise that Robin needed a lady; thus, Marian was born. 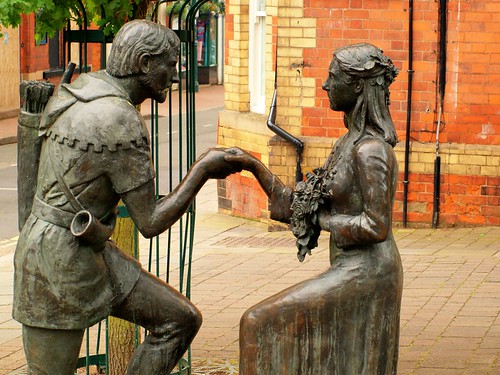 The outlaw himself is not the noble gentleman who only thinks of the poor and the plight of the common man. He is the common man in the ballads, described as a yeoman, and we see him frequently not showing what we have come to know as his trademark chivalrous mercy to his opponents. Indeed, many of the texts end with the death of the opponent. For instance, in “Robin Hood and the Monk,” Little John unceremoniously hauls the monk who betrayed his friend to the ground and kills him as another man Much kills the page with him simply to keep him quiet:

John smote of the munkis hed,
No longer wolde he dwell;
So did Moch the litull page,
For ferd lest he wolde tell. (ll. 203-6)

It is a bloody scene with little in the way of any kind of mercy for those who oppose the outlaw or his men. Robin Hood’s famous nobility and chivalrous nature are later inventions, added and manipulated for the needs of his various audiences throughout the centuries.

For the second part of the week, we turned away from the late medieval origins of Robin Hood and looked instead at the evolution of the legend and its continued popularity. To that end, we read Stephen Knight’s article “Remembering Robin Hood.” Also, while it feels a bit odd to do so, I assigned my students to listen to/watch a lecture I gave a couple of years ago on this very subject, entitled “Robin Hood, the Once and Future Hero.” The lecture is here for those interested in it:

My point in this lecture is that there are many qualities the Robin Hood legends possess that have kept them alive and vibrant for centuries. One of the major qualities is that greenwood I mentioned earlier. While there are challenges in being exiled from society, “outside” of the “law,” there is also freedom in not having to answer to authority, in seeing those who are corrupt receive the justice they deserve (but might not receive if protected by society). Robin is often depicted, in whatever incarnation, as freely roaming the woods, doing what he wants when he wants to do it, making his own law and living his own code. This is appealing to a variety of people, not the least of which would be children who sometimes chafe against adult authority, which explains why the legend became such a popular children’s story:

[H]is popularity with children and the relatively powerless continued long after the popular vogue of the other medieval romance survivals faded…[H]is identification with unsophisticated readers, especially children, during his extraordinary extended vogue may well explain, even though there is no categorical evidence, his peculiar place in the company of children. (Brockman 68)

Or, as Joseph Falaky Nagy, writes:

The narrative tradition about Robin Hood, which throve in folklore and the popular literature of England from the medieval period to the nineteenth century, reflects the worldwide fascination with the figure of the outlaw, the man who exists beyond human society and has adventures which would be impossible for normal members of society in their normal social environments. (198)

Robin Hood is in a position, that space between civilized and uncivilized, doing what we only think about doing, that speaks to those who, for one reason or another, seek an escape from limitations.

In the Weekly Activity for Robin Hood, the students were asked to pick a film featuring the character (alas, with the exception of the animated Disney version, as it is an “easy” choice) in order to think about its representation of the outlaw, particularly considering how it stacks up against the original tales. There are many lists available of Robin Hood films; one, for example, is on IMDb, if you feel like a marathon (or you could just raid my DVD collection!). What, might you ask, is my favorite? The Adventures of Robin Hood will always have a special place in my heart and, thus, is in a class of its own. Also, it tends to be the iconic image of the hero. The live-action Disney The Story of Robin Hood with Richard Todd is also one I return to often; I think the music makes it particularly special. Interestingly enough, in that one, Robin does not start off as a nobleman. The silent version with Douglas Fairbanks, Sr., is incredible; the full version is available on YouTube, which I have included below. The athleticism of Fairbanks combined with its charming simplicity is, in a word, wonderful. (I also have a soft spot for it because I received as a gift several original props from the film. They are a centerpiece of my collection.) The most recent Robin Hood with Russell Crowe is disappointing on many levels. Although it attempts to return to the grittiness of the original tales, it fails to capture the lightness and freedom so inherent in the legend. It does, nonetheless, speak to the idea that the story is malleable and can be applied to different situations in various time periods (here, Magna Carta).

Next week: we visit Oxford and Tolkien.

PS In my spare time (what little there is!), I am reading the King Raven trilogy by Stephen R. Lawhead. It reimagines the Robin Hood legend in Wales and sets it during the time of William Rufus, son of William the Conqueror. It is a new take on the story, but, so far, it is working well, and I am far enough in that I can recommend it.

2 responses to “English Studies Abroad: A Gest of Robyn Hode”