My main reaction to the experience of participating in the Sherwood Forest Archaeological Field School at King John’s Palace in Clipstone, Nottinghamshire is this: medievalists not in the field of archaeology should participate in this field school or something like it. I cannot emphasize that enough. This opportunity was unique and eye-opening. It both reinforced my passion for the period as well as opened up new avenues of experience.
–
When I first arrived at the field school, our hearty band of nine volunteers introduced ourselves to each other. At my turn, I added that being on an archaeological excavation had been a bucket list item for many years. This is true. The archaeologists from Mercian Archaeological Services leading the site laughed when I said it was a bucket list item. Like any of us, they know the tedium and hard work that goes with their job, but, for me, I have been fascinated with archaeology for as long as I can remember. The act of uncovering even the tiniest of artifacts, piecing together the story of a location, people, or event, is not only an interesting endeavor, but, I feel, a necessary one in order to understand the past. I really would have been content at almost any site, but to participate in one in the heart of Sherwood Forest, the heart of the land that I’ve studied and dreamed about since I was a child? This was unbelievable.
–

–
On our first day, Andy Gaunt of Mercian explained some of the history of King John’s Palace and the surrounding area. I have in a previous post mentioned the history of the Palace, particularly that six successive Plantagenet kings from Henry II to Edward II used and visited it. As with any other architectural structure, it was built up, neglected, added on to, and burned at regular intervals throughout its history. Much of the excavations have attempted to define the boundaries of the Palace land, particularly the early versus later ones. Our job on this field school was to excavate a trench on an embankment in order to begin the determination if it might be an outer wall of the early Palace. More on that later!
– 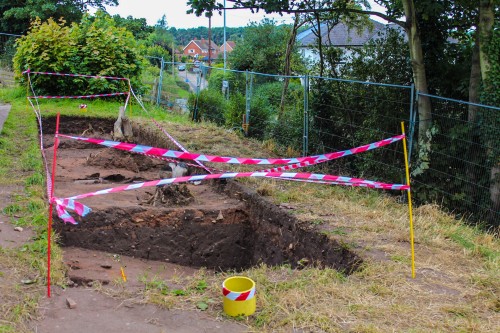 –
Part of Andy’s initial briefing was to talk about Sherwood Forest. It’s easy enough to say blithely – and I have frequently before this experience – that a medieval forest is not just trees. It is different, however, to see the landscape in context. They explained that the area around the Palace still looks very similar to what it did in the Middle Ages. The Palace would have been visible from any direction of approach. The small village of Clipstone (or Kings Clipstone as its known to distinguish it from the bigger, modern town of the same name) would have existed in a similar configuration as it does now.
–

–
But it certainly was and is not in the middle of what we typically call a forest. As Andy pointed out, the Sherwood Forest Visitor Center is this typical forest landscape, but the original Sherwood encompassed forest, heath, villages, buildings, hunting-scapes, etc. In reality, it was a huge area. Again this is a known fact, but to witness it – to see the land around the Palace where the kings and their guests would have stayed, the heaths in what is now called Sherwood Forest that would once have seen hunting parties riding across them, the ancient and veteran trees that have witnessed the comings and goings of history for centuries – is a different experience.
–

View from the Palace into the village

Look closely – the indent of a medieval path still exists through the forest!

–
It reinforces and provides context for image after image described in medieval texts. No less importantly, it grounds those texts. Quite literally. It grounds them in the feel and presence of their own settings.
–
In the next couple of posts, I will give some detail about my other impressions of participating in the field school as well as some of the archaeology skills we learned.
–
–Kisha