Medievalists.net has recently been posting state-by-state surveys of medieval studies programs. Check out the Massachusetts one posted a couple of days ago.  (Also note the MassMedieval mention – thanks, Medievalists.net!)

Photos from Student Trips to the Higgins

In addition to the photos below, one of my students recently blogged for the university about her experience at the Higgins. I echo John’s sentiments – the Museum’s closing will be a great loss. 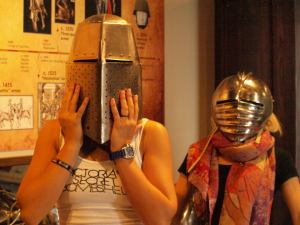 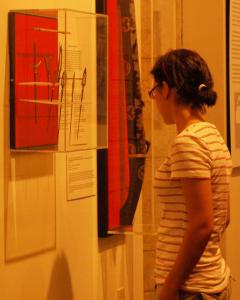 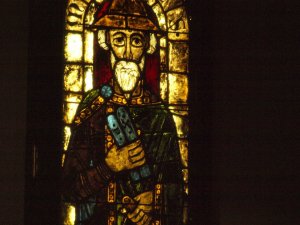 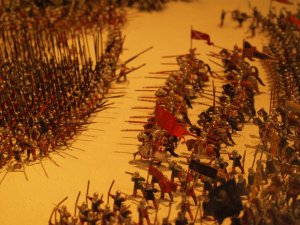 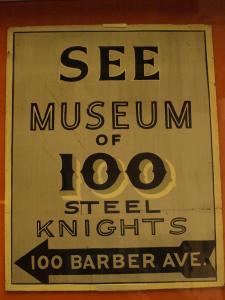 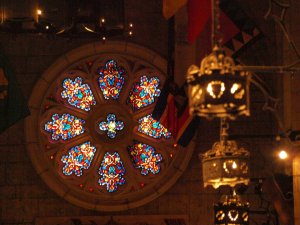 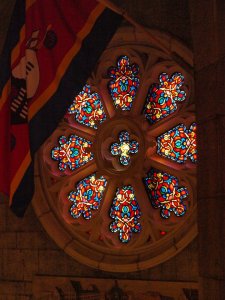 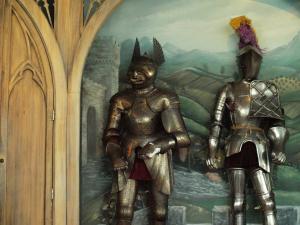 Massachusetts medievalists (and history scholars and enthusiasts) are losing a tremendous resource at the end of this year with the announced closing of the Higgins Armory in Worcester. The announcement, made officially on Friday, ends a long period of financial uncertainty for the museum, but begins a new uncertainty about the future of the Armory’s holdings. The plan unveiled by the Armory’s acting executive director will see the majority of the Higgins collection moved to the Worcester Art Museum (though about 500 pieces, most of them deemed not to be of display quality, are being auctioned off later this month by Thomas Del Mar Ltd., a subsidiary of Sotheby’s of London). Less certain, at least from what I’ve been able to learn so far, is whether the WAM is committed to the same sort of gleeful interactivity that has made the Armory such a joy to visit over and over again.

Like many medievalists within driving distance, I’ve taken students to the Armory many times over the years, and an independent visit to the museum has stood as my (only) offer of extra credit in my medieval survey course. I don’t know exactly how many times I’ve stood in the great hall and tried to decide what to look at first. I’ve had various favorite pieces over the years–a beautiful suit of chain mail with words from the Qu’ran etched on the individual links; a collection of jamadhar (Indian punch-daggers, popular in the 16th-17th centuries); a reproduction suit of boarhound armor kitted out onto a model that looks suspiciously like an oversized Jack Russell Terrier (a.k.a. “Wishbone”). But the overall effect of the museum is greater than any one of its exhibits or pieces, and I’ve cheerfully wandered for hours through its holdings and been transported.

On the other hand, part of the Armory’s charm is the way it interprets its mandate to house and exhibit arms and armor creatively and playfully (see, for example, their 2011 display of reproduction armor from the Star Wars universe, thus giving the universe the glory of, well, pictures like this).

My favorite experiences at the Armory, however, have come from bringing students there and enjoying their explorations of the museum’s offerings–from the jousting exhibits to the try-on-some-real-armor presentations (I still have a picture somewhere of a shocked but rapturously happy student wearing a heavy breastplate during one of these classes) to the student-friendly curators and guides to the building itself, a 1920s art-deco fantasy castle/monastery curiosity purpose-built by the (perhaps slightly eccentric) John Woodman Higgins to house his remarkable collection.  Currently, it’s not clear what will happen to the building–it’s on the National Register in its own right, so it will probably continue to exist, but whether it will still be open to the public is anyone’s guess.

I’ll update the blog with more information as it becomes available. In the meantime, if you’re within a day’s drive of Worcester, do yourself a favor and make the time to go see the Higgins Armory in its current setting before the end of 2013.

The announcement of Benedict XVI’s decision to step down from the papal seat has, unsurprisingly, led to a flurry of media attention. A fair amount of the initial reaction has focused on the medieval precedents for a papal resignation (or abdication, depending on whose view is taken of the nature of the papacy). Those precedents which are being cited are mainly those of Gregory XII (1406-1415), the most recent pope to resign the office, or Celestine V (1294), the last to do so for apparently self-determined reasons (Gregory XII’s resignation, triggered by the Council of Constance’s efforts to end the Western Schism, was technically involuntary).

Both are of interest–particularly Celestine, whose relics Benedict XVI has visited multiple times and whose resignation Benedict has publicly called a humble act demonstrating great courage. But, as it is a long-recognized papal tradition to use one’s choice of name to signal a bit of historical precedent, it’s worth noting that, though fewer than a dozen popes are known to have resigned, Benedict isn’t the first of his name to be among them. In fact, with two medieval antecessors, Benedict XVI will be (by most reckoning) the third Benedict to resign the position, making Benedict the most-resigned name in papal history and breaking a tie with the Gregorys (VI and XII) that has stood for nearly 600 years. As we’ll see, the names have been linked in this category before… 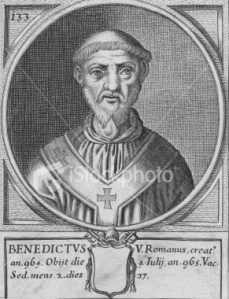 Benedict V Grammaticus was elevated to the papacy in May of 964 against the wishes of the Holy Roman Emperor Otto I. In retaliation, Otto besieged Rome and set about starving the city into submission. After a month (during which Benedict repeatedly threatened to excommunicate Otto and his entire army) the gates were opened and Benedict was handed over. Otto tried Benedict on the grounds that his elevation constituted an usurpation, since Otto’s preferred candidate (the then-antipope Leo VIII) was alive and well. Faced with the possibility of execution and promised mercy if he capitulated,  Benedict admitted his “guilt” and abdicated. He died the following year in Hamburg. He was buried in the cathedral there,  but was moved to Rome sometime around 988…whereupon the record of his reburial location was lost and, if you will, remains unknown. 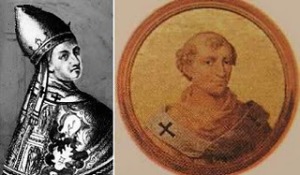 The last Benedict to resign was Benedict IX, one of history’s worst popes and the only one to hold the office three separate times. Benedict IX was somewhere between 12 and 20 when he first became pope through the political favor of his father, Count Alberic of Tusculum. Benedict was actually the third consecutive member of the family to hold the office–Alberic’s brothers Theophlyactus and Romanus were elevated as Benedict VIII (1012-1024) and John XIX (1024-1032) respectively. Four other relatives had held the office in recent history as well–Sergius III (904-911), John XI (931-935), John XII (955-964), and Benedict VII (974-983)–but the level of nepotism shown here was notable even for its time.

Benedict IX was a deeply unpopular pope, known and reviled primarily for his dissolute lifestyle. Commentators of his time accused him of adultery, rape, murder, orgies held within the Vatican, and “other unspeakable acts,” and the Catholic Encyclopedia calls him a “disgrace to the chair of St. Peter” who treated the papacy as a sort of family heirloom. He lost the papacy for the first time in 1045 when one of many dissatisfied factions forced him out of Rome and placed Sylvester III in his stead. Months later, Benedict returned and forced Sylvester out (though some sources still considered Sylvester the legitimate pope). His second papacy lasted only a few months, however, before he was convinced (with a hefty bribe) to resign the seat in favor of his godfather, the soon-to-be Gregory VI. Benedict would regret this decision and attempt to reclaim the seat the following year when Gregory VI was forced to abdicate after his bribery of Benedict led to a charge of simony. The German-born Clement II (who had helped to force Benedict and Gregory out of office) was elected in his place, but when Clement died only a year later (of what we now know was a poisonous dose of sugar of lead–possibly those whisperings about Benedict’s murderous tendencies weren’t exaggerating), Benedict returned to the papacy–by taking the Lateran Palace and investing it with armed troops. In 1048, a German militia was needed to oust Benedict for the third and final time, replacing him with Damascus II. A year later, Benedict refused to appear for his own trial for simony and was excommunicated, after which the historical record becomes a little fuzzy as to his ultimate fate. Two stories often told are that he either became a monk and truly repented of his youthful arrogance or that he lived in exile for decades and never stopped plotting to take back the papacy.

So as we prepare to witness the historic transfer of authority from one living pope to another, let’s be grateful (or perhaps wistful, depending on your personal bent) that the process is almost certainly to be the dullest abdication by a Benedict in Church history…although, if you’re the sort of person to credit the alleged prophecy of the 12th century St. Malachy, things could get a lot more interesting fairly quickly.

Middle Ages in the News: Richard III and Hildegard of Bingen

A short post in honor of two recent news items:

In September, archaeologists might have uncovered the body of Richard III (1452-85) under a Leicester car park. The skeleton has the tell-tale head trauma as well as the spinal abnormalities associated with descriptions of the king. I never hear something like this without a little shiver of excitement. I can’t even imagine the emotion at the moment of such a discovery. It’s Howard Carter at the tomb of Tutankhamun (cursed or not). Bouchard and the Rosetta Stone. The Xi’an farmers and the Terracotta Army. Terry Herbert, his metal detector, and the Staffordshire Hoard. To uncover that type of history, to change our understanding of history. There is no word to describe it. Granted, we do not have evidence to prove whether this skeleton really is Richard III yet. Still, the imagination cannot help but hope. What can we learn? Perhaps historic forensics can tell us about his last moments before he was killed. Perhaps study of the body can reveal the true nature of his physical ailments, a discovery that is of great interest to those like myself working in the field of disability studies. Shakespeare has given us an image of Richard III as ill-formed in body as well as in character. This description has been set at the feet of Thomas More, who seems likely to have been, as Emyr Wyn Jones states, “directly involved in the retrospective Tudor propaganda directed against the last of the Plantagenets.”1 Maybe this will be one of those perfect intersections of science, history, and literature when each will inform the other and create a multi-disciplinary window for viewing the past.

Hildegard of Bingen Named Doctor of the Church

After being officially named a saint earlier this year, Hildegard of Bingen has now been named a Doctor of the Church, only the fourth woman to be so named of, now, thirty-five other Doctors, all given the title for their contributions to the Church, particularly in matters of doctrine. Hildegard is rather an amazing woman. I learned of her when I was quite young through her music. If you have not listened to her work, I recommend remedying that immediately. Check it out here. No matter your stance on chants, it is an experience. As a side note, like Richard III, she provides another interesting opportunity for science, history, and theology to meet. As a mystic, Hildegard is known for the visions she experienced, which greatly shaped and influenced her beliefs and which she shared with others. There has been much discussion, based on her descriptions of her experiences, that has suggested she might have suffered from migraines. Thus, another figure of interest to those studying medieval illness. For more information on Hildegard, see Fordham’s The Life and Works of Hildegard von Bingen (1098-1179).